When my daughter’s Argentinian colleague returns to London after a trip home, you can predict with certainty that he will be carrying a number of packs of Alfajores, his country’s favourite sweet treat. They’re biscuits made from a dough rich in butter and cornflour; a layer of dulce de leche (caramelised condensed milk) is sandwiched between a pair of biscuits, with the edges of the filling rolled in desiccated coconut – or, as in the version I’ve made here, dipped in chocolate, in which case they’re called “Alfajores marplatenses” (from Mar del Plata). The combination of crumbly, melt-in-your-mouth biscuit, soft caramel and chocolate is a sure fire winner.

I made alfajores of the most often recommended size, around 5 cm diameter, which are substantial enough to make a complete small dessert on their own, the alternative being to make smaller “alfajorcitos” of 3-4 cm diameter.

Recipes for the biscuits vary to a fair extent and my choices were largely dictated by the ingredients I had to hand. Here are some of the things you can adjust:

The recipe that follows made 12 fully assembled alfajores with plenty of biscuits and a bit of chocolate to spare. But this will depend very much on the thickness and diameter to which you roll and cut them.

If you’re in Spain or the Americas, the chances are that ready made dulce de leche is available in your local supermarket. Otherwise, here’s how to make it from sweetened condensed milk (if you can’t find that, you can make dulce de leche from scratch from milk and sugar, as shown in this post on Epicurious, but that looks like a lot of work).

Warning: the many wonderful features of alfajores do NOT include structural integrity. They are very fragile – the crumbliness is part of the appeal – so handle with care!

Several Alfajores recipes point out that step 6 is more or less impossible to accomplish, including the one which goes “my mum always says these should be eaten the next day but I’ve never managed this”. I can confirm that they *are* better the next day, but I’ll leave the decision to you and your self-control… 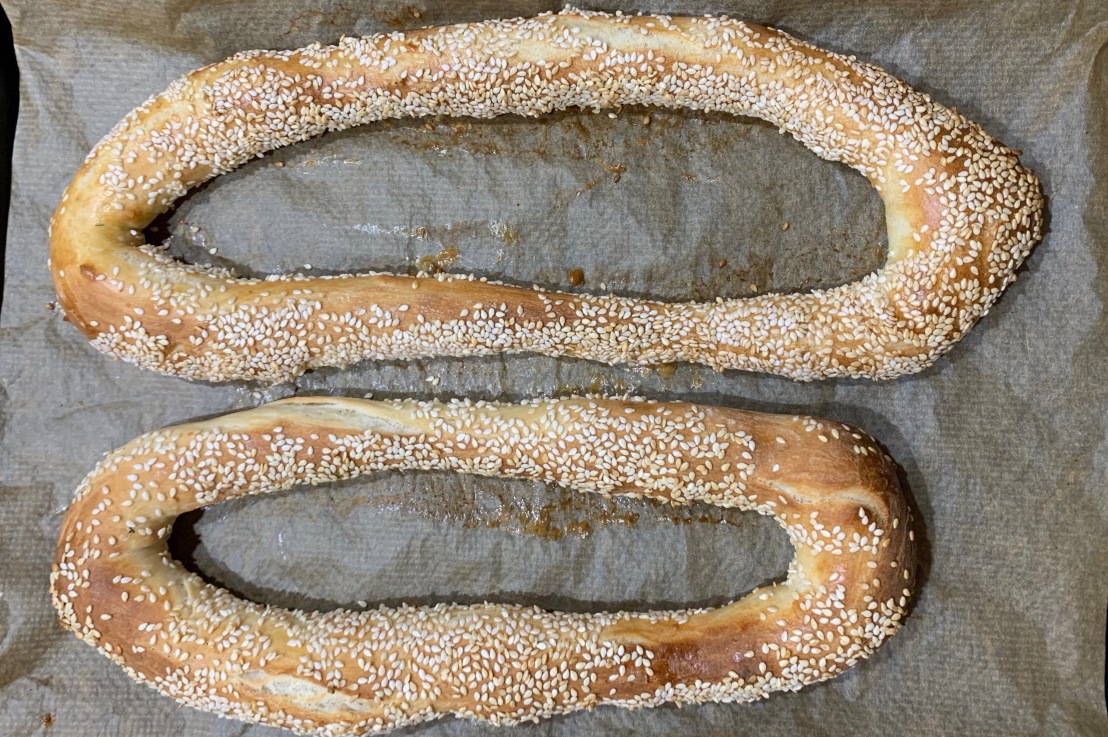 Almost every street corner in East Jerusalem has a vendor with a trolley piled high with hoops of sesame-encrusted white bread called Ka’ak Al Quds: the aroma of fresh baking and toasted sesame is overpowering and irresistible. London-based chef Sami Tamimi, originally from East Jerusalem, has published a glorious book on Palestinian cuisine entitled Falastin (the Arabic language, he explains, does not have a letter “P”, so it should perhaps be “Falastinian”). I cannot recommend the book highly enough and you really, really should go out and buy it, so I hope Sami will forgive me for reproducing my version of his recipe here.

This will make six of the hoops-shaped loaves: you will be able to fit two at a time onto a typical baking tray (something like 35cm x 25cm). If you have three trays and a big enough oven, you can bake the whole batch at a time; otherwise, you’ll have to do them in two or three batches.

Leave to cool for a few minutes before eating: this bread is at its best straight out of the oven, but you don’t want to burn your tongue! 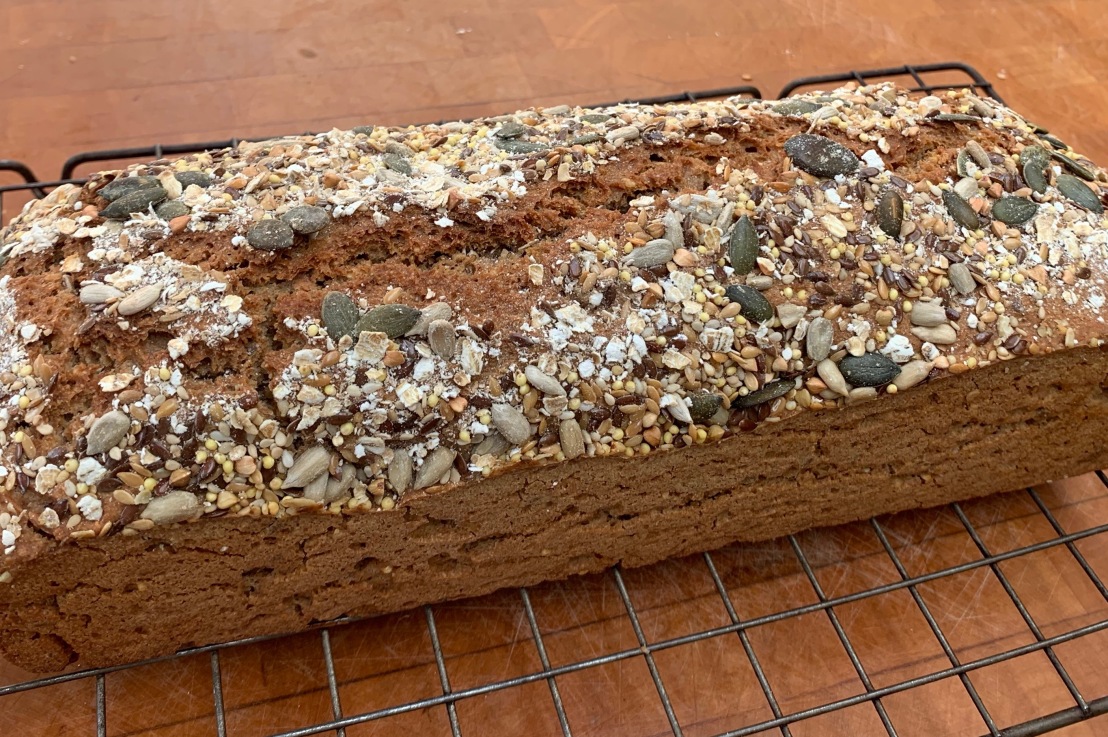 Two posts in two days, I know, but this one’s really straightforward!

If you think of Scandinavian bread, you think of dark, dense, rye-infused creations to keep you warm in a Nordic winter, or possibly well stoked up for a hike around the fjords: in short, Norway’s fjellbrød (which translates simply as “mountain bread”). I’m not terrifically sure as to how authentically Norwegian this recipe is – I’ve gone for a variation on two posts I’ve seen from Hazel Verden and  Finnish blogger Asli, which both seem to derive from Nigella Lawson – but it’s very easy to make, very full of flavour and agrees with my memory of trips to Bergen.

It’s also the oddest recipe for yeasted bread I know: the only one that involves no kneading, no leaving to rise, and putting your bread into a cold oven. But I can’t argue with the results. 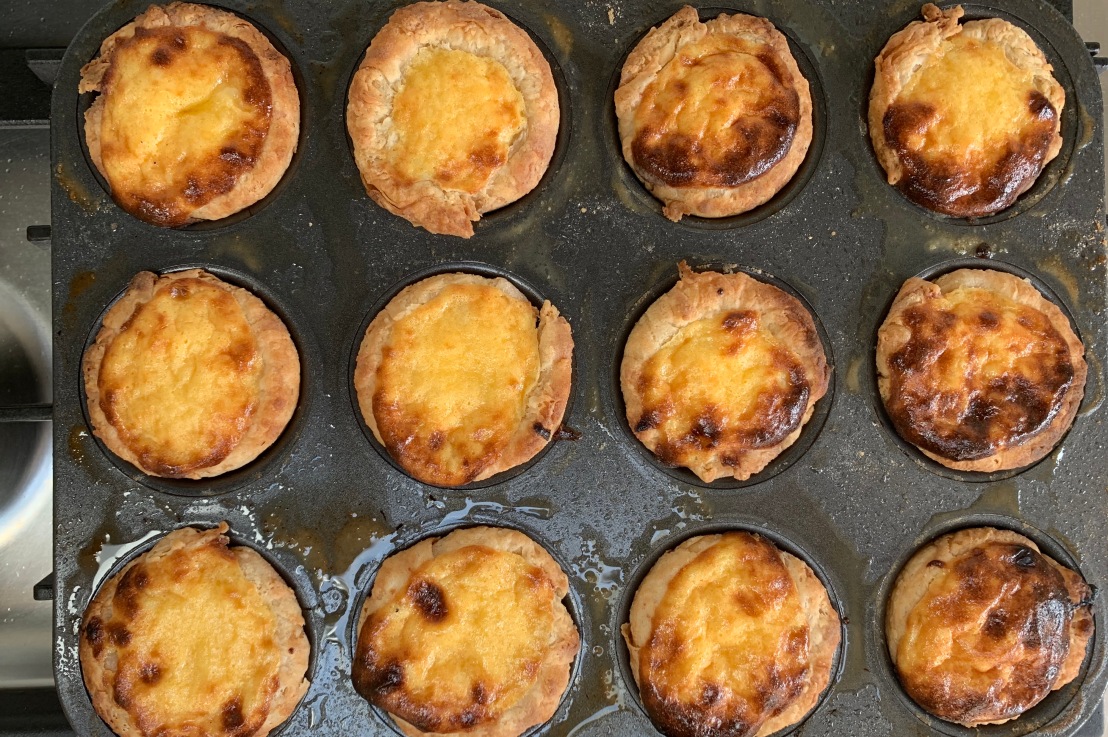 This recipe is dedicated to Conceiçao, who looked after me during many happy childhood summers in Portugal. There was only one option for the Portuguese bake: the little puff-pastry custard tartlets called Pastéis de nata – or Pastéis de Belém, in their most famous incarnation in the bakery in the Lisbon suburb of Belém, around the corner from the Mosteiro dos Jerónimos and opposite the monument to Henry the Navigator.

A Pastel de nata has two components: a puff-pastry case and its custard filling. There’s nothing particularly unusual about Portuguese puff pastry recipes, so you can use whatever recipe you like. Since puff pastry is fundamentally difficult, the alternative is to simply buy the stuff ready made, but if you do this, try to get an all-butter version or the flavour balance will be seriously off.

What is slightly unusual is the mechanics of the tartlet: the trick is to roll the whole sheet of pastry up tightly, Swiss roll style, then cut it into rounds. You flatten each round and press into the depression of a shallow cupcake or muffin tin to form the characteristic snail shell pattern in the flakes of the cooked pastry.

The custard is also unusual: it starts with a simple flour and water mixture; you then add hot syrup, then you cool the whole lot and add egg yolks; the custard is then baked in the tartlets.

I’ve started from two Portuguese recipes: one for the pastry and one for the pastéis themselves. If you haven’t made puff pastry before, the recipe contains a handy video showing you the technique far better than I can describe it.

Your key objective throughout this process is to avoid the butter melting and leaking out through the sides of your pastry. If it’s a very hot day, which it was when I made these, you will need to put things back into the fridge frequently to keep them down to well below the melting point of the butter. You can tell from the cover photo that I wasn’t entirely successful.

The tricky part of this recipe is to get as many of the lumps out as you can. Use a wire whisk and be ruthless with it!

Aish baladi is the Egyptian wholemeal version of the bread more generally known in the Middle East as “khubz arabi” (Arab bread) or in the West as “pita bread”. It’s a small, flat bread baked at high temperature which forms a pocket into which you will be stuffing your hummus, ful medames or other goodies.

Traditionally, aish baladi is baked in a very hot, wood-fired, open topped clay or brick oven (the Arab version is called a tabun, the Indian one a tandoor): the bread against the hot sides and left there for a very short time. That’s always going to make it difficult to replicate in a standard Western kitchen, the key requirement being to take your circle of dough from room temperature to high heat as fast as you possibly can. It’s the suddenness of this process that causes the water in the middle of the bread to vaporise quickly; the pressure from the resulting steam causes the two sides of the dough to separate and form the pocket.

The Saveur recipe I started from suggests that you use a pizza stone: I don’t have one, but I do have non-stick frying pans that can go into a very hot oven: these work just fine if I wind my oven up the its maximum temperature. If I start with the bread on a standard baking tin at room temperature and put the whole thing into the oven, the result is perfectly edible bread, but without the puffed up pocket, which kind of loses the point.

The dough is a pretty straightforward yeasted wholemeal dough. I’ve broadly followed Saveur’s method (although I reduced the water content considerably – the dough from their recipe is really wet), but I suspect I could have used my standard method of “start the yeast with a teaspoon of sugar and some warm water” without a problem. Wholemeal wheat flour should be fine; if you want to be historically authentic, use emmer wheat; I used spelt. Do not use wholemeal rye flour, which doesn’t form enough gluten: my first attempt at aish baladi went comically wrong when I opened a packet of dark rye flour by mistake and couldn’t understand why interminable amounts of kneading appeared to be having no effect whatsoever.

Be careful: bread straight out of the oven will be really, really hot: you want to give it a minute or two before allowing anyone to risk biting in or they’ll burn their mouths! But the bread is at its best in the next 10 minutes after that.