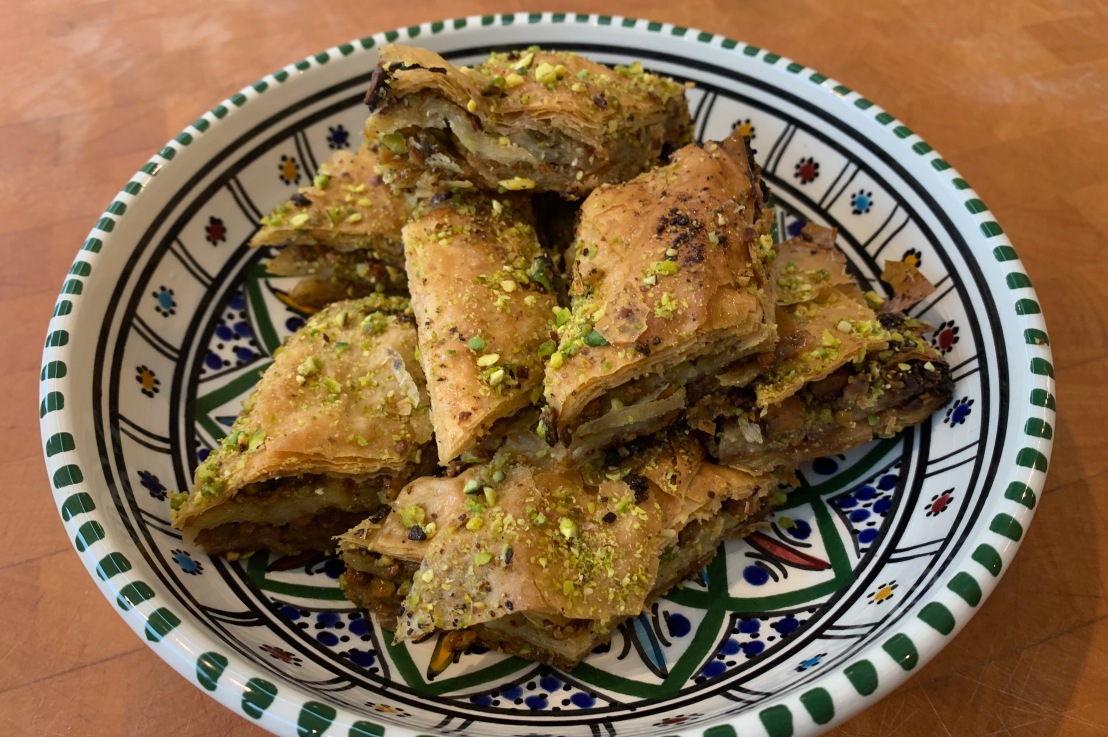 As we get close to 80% of the way round the world on this journey, I have to admit, dear reader, that some of the bakes have been getting a bit on the obscure side (and there are more of those to come). Baklava, however, isn’t one of those: the nut-filled, syrup-infused flaky pastries feature on the dessert menu of just about every Turkish, Greek, Persian or Middle Eastern restaurant on the planet, not to mention innumerable cafés.

Although scholars point at recipes for vaguely baklava-like desserts going all the way back to ancient Greece, the dish as we know it today probably showed up in the kitchens of the Ottoman Empire. So essential is the dish to Turks today that during Ramadan in 2020 – in the eye of the storm of the Covid-19 pandemic – baklava bakers were granted specific permission to stay open on the grounds that this was an essential commodity (if you don’t believe me, check out the New York Times article).

There are many variations as to the choice of nuts, the make-up of the syrup and the way the final product is shaped, but roughly, it comes to this: the Greek version is likely to be filled with walnuts and soaked in a honey based syrup, whereas the Turkish version is more likely to use pistachios with a lemon-infused sugar syrup. That’s a very broad brush distinction – you’ll find plenty of exceptions, mixtures and different ideas.

I’m going to assume that in common with 99.99% of home cooks on the planet, or at least outside the Middle East, you have no intention of making your own filo pastry. On that basis,  making your own baklava is relatively straightforward, albeit time-consuming – it depends on how quick you are at laying out sheets of filo and brushing melted butter over them, which you’re going to be doing a lot of. I ended up with a kind of amalgam of recipes from The Spruce Eats, The Mediterranean Dish and Cleobuttera. The key thing to remember is to pour cold syrup over the hot baklava and then leave it to soak for a substantial amount of time.

The quantities in this recipe seems to be set so that you leave the syrup on for the whole time you’re making the baklava, reaching the right stickiness around the time you finish. This kind of worked, but next time, I think I’ll use a third of the amount of water and just get it done in adavance, with a fraction of the time boiling down.

Ideally, you want a baking dish the same size as your filo sheets, at least 2.5 cm deep.. Mine was 37 cm x 27 cm, which was around 3 cm too narrow, so I had to trim down the filo. A word of warning, though: you will be cutting the baklava in the dish before it goes into the oven and, most likely, again when it is baked. This will probably gash any non-stick coating on your dish (it did mine). You can probably help matters by lining the tray with a single piece of baking paper so that you can lift the whole lot out after baking, which at least means you’ll only wreck it once rather than twice. Alternatively, a Pyrex dish might be a better choice.

The diamond shape I used is pretty traditional, but you can, of course, try many different ideas: baklava is often sold in squares or rectangles.

The quantities assume that your filo comes in 250g packs, each of which has around 15 sheets. This lets you make three layers of 10 sheets each. Adjust the number of sheets accordingly: you want to use around ⅔ of a pack for each layer. Some recipes, by the way, just use two layers of filo with one layer of nuts – that’s fine too.

Next warning: filo dries out easily. Keep it covered with a tea towel at all times other than the minimum few seconds you need to peel a sheet off the block. 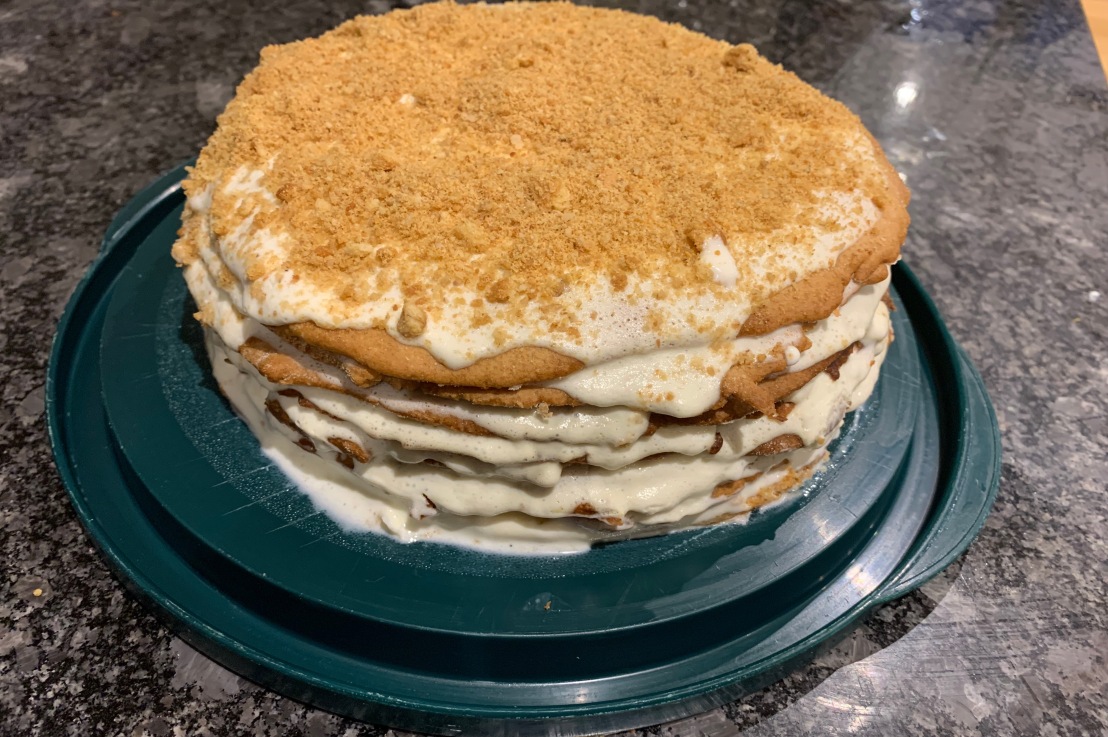 Many countries have their own versions of a cake made of a large number of very thin layers: the Hungarian Dobos torte is probably the most famous, the Czechs have Marlenka (originally from Armenia), the Croatians have Mađarica, there are various Asian versions like the Indonesian kek lapis. The Ukranians go for a multilayered honey cake called Medovik (which is originally Russian and popular in much of Eastern Europe).

Medovik consists of alternating layers of cake and a cream filling. Recipes for the cake are fairly consistent: they come out closer to a biscuit or pastry than to a normal sponge cake. Recipes for the filling vary more: the base ingredient can be sour cream or whipped ordinary cream or an egg custard.

There are two keys to Medovik, one of which is easy and one of which is decidedly not so. The easy part is to remember, when you’ve made your layers, to give the cake a long time in the refrigerator during which each wet cream layer soaks into the relatively hard biscuit layer below it, which is what results in a delightfully spongy feel to the whole assembly. The hard part is rolling the cake dough out as thinly and evenly as possible. You need to keep your rolling pin constantly floured to stop it lifting the dough, you need a careful touch to maintain evenness and you need to do your best to create a circle rather than the heart shape that I always end up with when I’m not concentrating. Picking up a finished circle is an impossibility, so I rolled my dough directly onto a silicone sheet: I suspect that it might be easier if I put a layer of cling film on top before rolling, but I didn’t try this.

I used the batter and the basic technique from a recipe on Ukrainian website ukrainefood.info, and used a simple sour cream and condensed milk filling as recommended by Smitten Kitchen (which may or may not change the cake’s name to smetannik – “sour cream cake” rather than “honey cake”).

Most of the recipes I’ve seen expect you to frost the sides of the cake in order to produce a beautiful round cylinder. I can’t see the point of doing this, so I made less filling and just put it between layers and on the top of the whole cake. I still had plenty to spare. 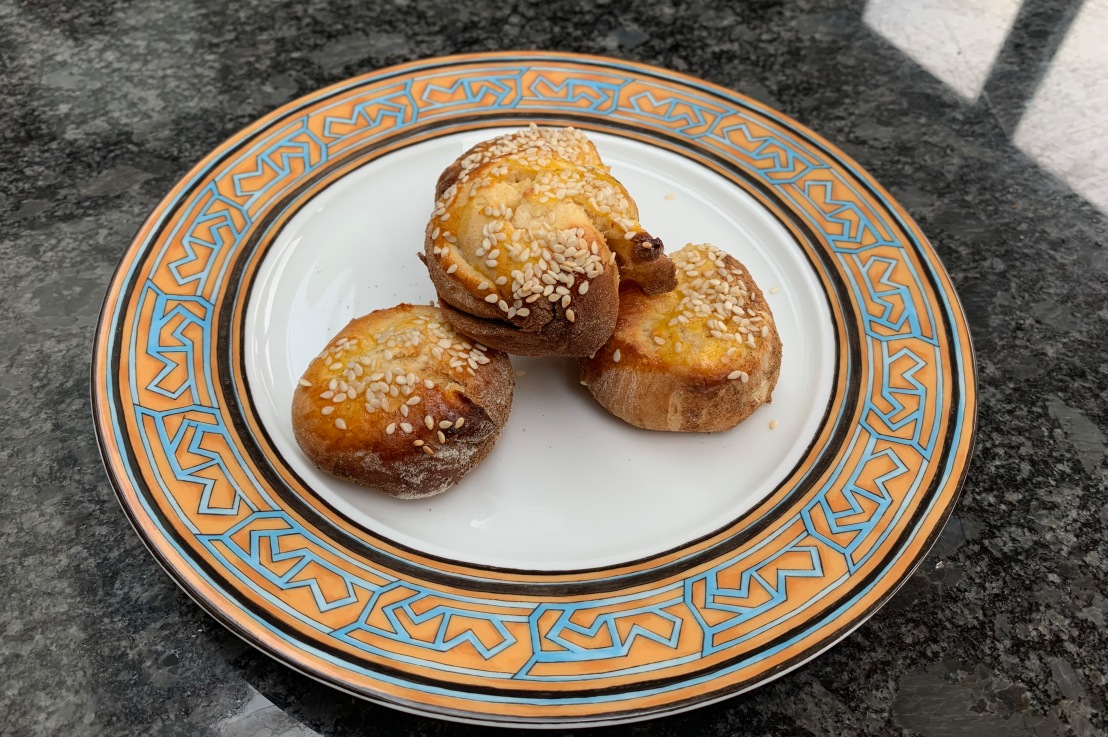 Like most of East Asia, Korea doesn’t really have a long-standing baking tradition – it’s to do with the relative scarcity of slow-burning fuel, which means that cooking is more likely to be done fast, at high temperature in a wok. However, Western baking has found its way to Korea (by way of Japan, in this case), where it has adopted a decidedly Korean accent. If you visit Seoul, I can vouch for the fact that their bakeries and patisseries are extremely popular and of super-high quality – even a relatively mundane chain bakery in a Seoul subway seems capable of turning out mouth-watering croissants.

In the case of gyepi-manju, the cookies that I’ve made here, the Asian accent comes in the form of sweetened bean paste and the specifically Korean accent is their love of sesame seeds. They’re pleasant, not over-sweetened cookies: some Westerners will want to add more sugar.

I started with a recipe from New-York based Korean cook Maangchi. While this isn’t the hardest bake in the world, there’s definitely room for error – and I made a few, which are visible in the photos. The first of these: Maangchi expects you to take the skins off your broad beans *before* boiling them, which I forgot to do. Taking them off afterwards is fine, but you need a much longer boil. The second is that I ran out of sesame seeds, so I substituted some decidedly un-Korean poppy seeds in my last few gyepi-manju (they were fine).

As usual, I’ve gone for metric quantities and ingredient names from the UK. I’ve shown the way I did the beans, since it worked fine. Go to the original if you prefer. 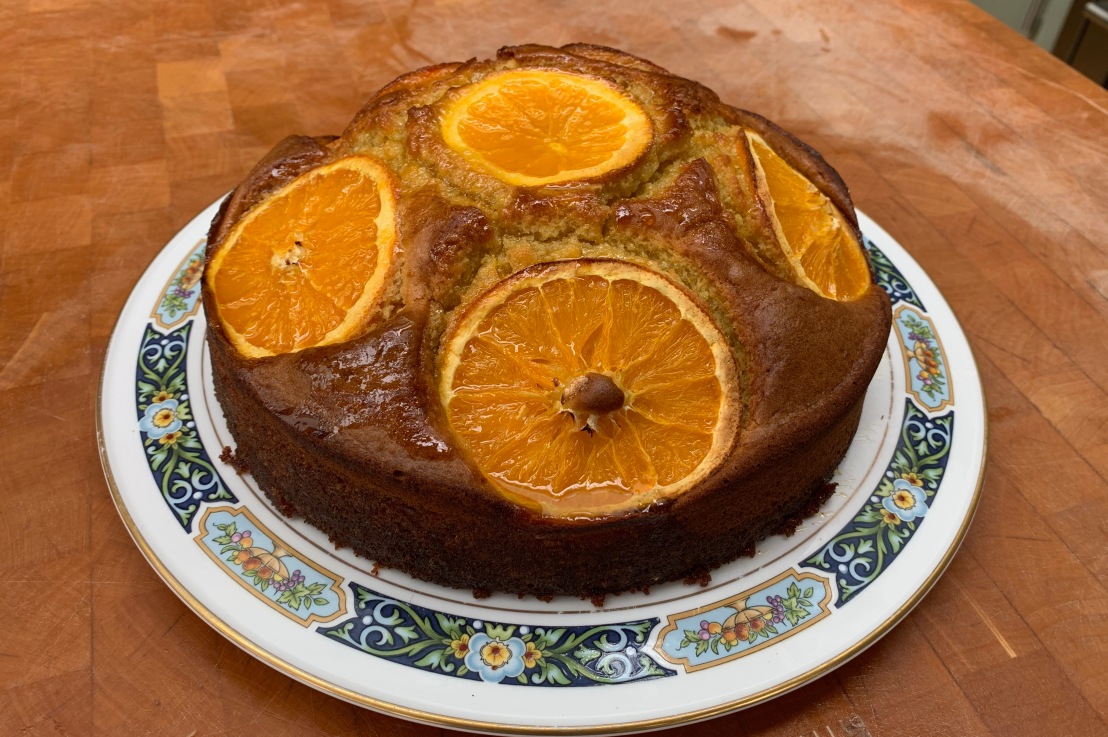 Tunisia grows a lot of oranges. Over 550,000 tonnes, according to The Guardian, in what was admittedly a freak year – apparently, 200-400,000 is more normal. Anyway, you have to do something with all that fruit, and one of things the Tunisians do is to make orange cake – or “Khobzet borgden”, as it’s called in Arabic.

If you look up English language recipes for Tunisian Orange Cake, you tend to get something different, often involving stale breadcrumbs and a lot of ground almonds. These are also very good – my wife has been making her mother’s orange almond cake recipe for years and it’s a winner – but I can’t find any evidence that they’re authentically Tunisian: the closest I got was a recipe where the cake was decorated with flaked almonds.

So I’ve gone for one of the many recipes for Khobzet borgden on Tunisian websites, generally in French. Variations include choice of fat (butter / olive oil / vegetable oil) and how to treat your oranges: the most extreme one I’ve seen involved blitzing whole oranges – skin, pips and all – and adding the resulting purée to your cake mix. Just about all the recipes involve drizzling your finished cake with an orange syrup. I’ve started with one from tunisienumerique.com (translation: digital Tunisia), which uses oil (I chose olive – it doesn’t specify) and lots of orange zest as well as decorating the top of the cake with slices of orange.

A couple of notes on my adaptation: (1) the suggested baking time of 20-25 minutes wasn’t even close. Either their oven or their baking tin is very different from mine. (2) my cake domed hugely in the middle. The original recipe specifies one sachet of baking powder, and I have no idea how much you get in a Tunisian baking powder sachet. So I went with around 12g, which may have been a bit excessive.

Tunisians would accompany this with black coffee. Personally, I’d go for both black coffee and a scoop of pistachio ice cream. But the choice is yours…