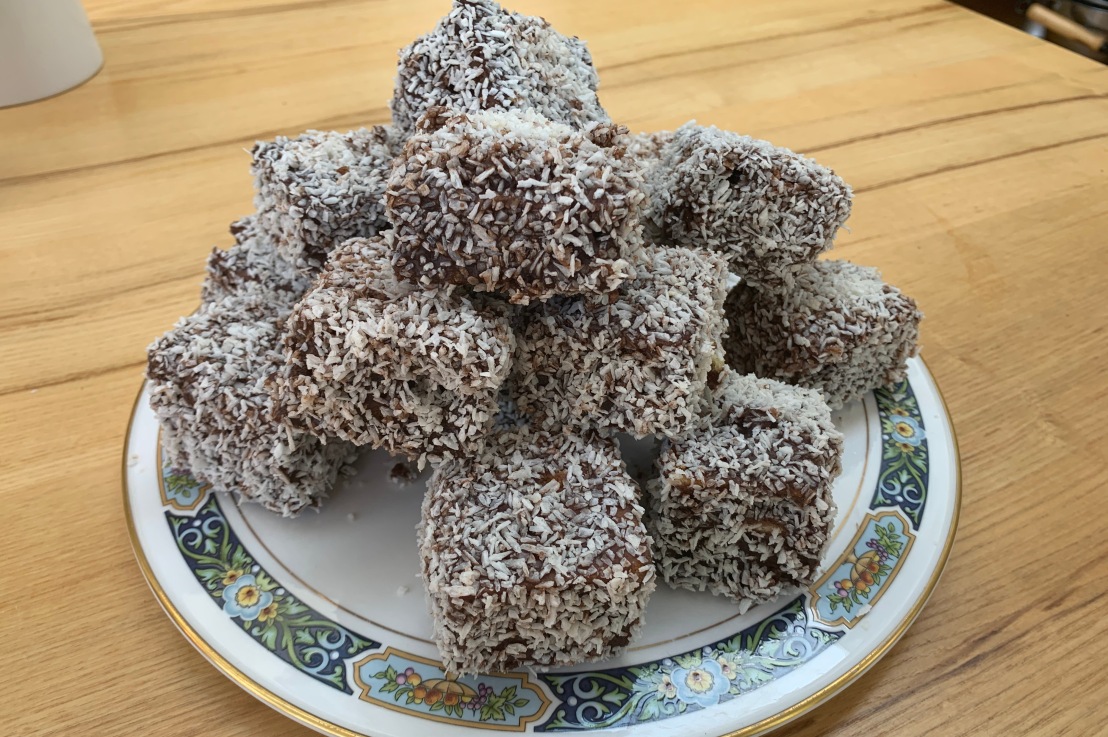 Since long haul travel looks like being impossible – or at least unwise – for the foreseeable future, let’s travel to the opposite end of the earth in our baking imagination. The Lamington is the definitive Australian cake, named after a sometime governor of Queensland (who apparently didn’t like them, according to TasteAtlas). There’s even a National Lamington Day, on July 21st, so if you’re reading this shortly after publication, you’ve got plenty of time to practise. This makes the Lamington one of a select collection of baked goods to have its own annual celebration day (cinnamon rolls are another, with Sweden’s Kanelbullens dag).

The recipe for Lamingtons could be written in a single line: cut a sponge cake into cubes, dip each cube in chocolate icing and roll it in desiccated coconut. I’m going to go into a bit more detail (after all, what self-respecting baking blog wouldn’t) but here’s the point: they’re a great option for hot weather because the coconut helps to stop everything melting onto your fingers. Anyway, I’m a sucker for anything made with coconut, so what’s not to like?

Most Lamington recipes are broadly similar. In fact, they don’t really vary much from the first recipe on record, from Queensland Country Life in 1900. You’ve basically got a couple of choices: filled/unfilled and portion-sized/bite-sized. Also, you can choose to use a filling or not. The original recipe specifies more icing, but you can also use whipped cream and/or raspberry jam, which is popular in New Zealand. I’ve gone for plain, largely because I think the recipe is sweet enough as it is, and anyway, keeping the cube structure looks really tricky with two layers of cake stuck together.

The much quoted Australian recipe in taste.com.au gets you 15 cakes of around 6cm on a side, which is a reasonable full portion size; Jamie Oliver’s somewhat different recipe gets you 30 cakes from around the same total weight of ingredients, which makes it more suitable for finger food at a party when there’s lots of other stuff. I’ve kept the sugar down a bit in my version.

What everyone agrees is that you should make the cake the day before you try to ice it: otherwise, your cake is going to fall apart horribly when you try to dip it. So here’s the day 1 part of the recipe:

The next morning, you’ll be doing the icing and rolling.

You might as well start by getting the coconut ready: you’ll want a decent amount of it in a shallow dish into which you’re going to roll your cakes and the rest in a separate bowl which you’re going to attempt to keep clear of drips of chocolate. Also get a cooling rack ready, putting it on a surface which you’ll be able to clean easily, because icing will drip onto it despite your best efforts.

That’s it. On a hot day, a Lamington and a glass of iced coffee is a snack fit for a king.

2 thoughts on “Around the world in 80 bakes, no.12: Lamingtons from Australia”