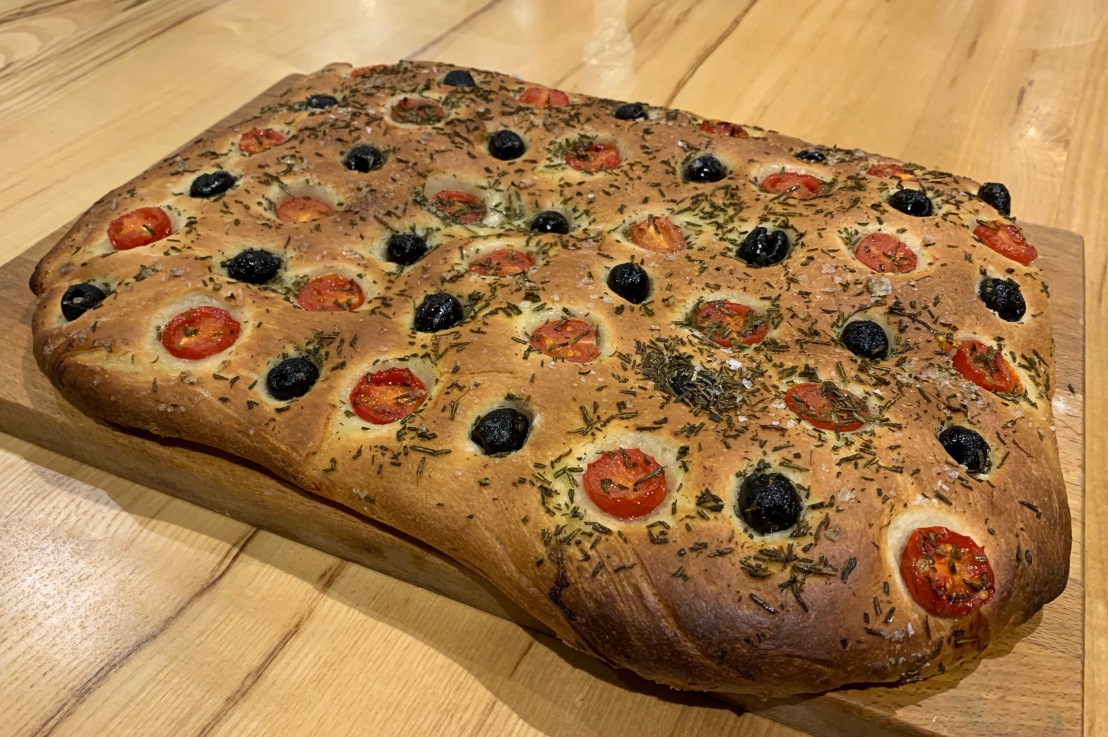 With apologies to ciabatta-lovers, focaccia is the Italian bread par excellence. Its pillowy, soft texture, coupled with a crisp outside, a slight crunch of salt flakes and the aroma of olive oil simply can’t be beaten.

My focaccia recipe is, to be honest, a bit of a mongrel. Prior to this strange year, I was visiting Italy around twice a year, but the best focaccia I have ever had was not made by an Italian but by an Indian chef at a hotel in the mountains of Oman who swore by a triple proving. The softest, most pillowy dough – my ideal focaccia consistency – comes from the kneading method in the Persian flatbread recipe in Sabrina Ghayour’s Persiana. I’ve gone for Giorgio Locatelli’s recommendation for flour (from his Made in Italy, via Felicity Cloake’s round-up recipe in her excellent “The perfect xyz” series in The Guardian), and done toppings as suggested by Italian-American Maurizio, aka The Perfect Loaf. Personally, I think the results are well worth the extra effort, but there are certainly shortcuts available if you’re pushed for time.

Two important variables are the salt and oil content. I eat a fairly low salt diet and the amount in here is about the maximum I can take. For some, even this will be too much; for others, this won’t be nearly enough compared to the salt hit they expect from a focaccia. My focaccia is also relatively low in oil: you may prefer to drizzle on a lot more than me. You’re just going to have to experiment until you get these to your taste.

Also, I’ve opted for a 40cm x 30cm tray, which gives a flattish focaccia with a relatively short, hot baking time. A variation would be to use a smaller, higher-sided tin and a lower temperature (say 200℃) for a loaf with a higher ratio of inside softness to outside crust.

There are some options as to how to prepare baking trays. You’re trying to get high heat onto the base of your focaccia as soon as you can, so Cloake suggests that you preheat a pizza stone in your oven and “transfer” the focaccia to it. That’s all very well, but it’s difficult to transfer a large rectangle of dough while keeping its shape, without the toppings falling off. I opted for a metal baking tray placed onto the stone: metal is a good conductor and this did the job just fine. An alternative is to lay out your focaccia on baking parchment: if you don’t have a pizza stone, you’ll want to preheat the metal tray and then move your dough to the heated tray while still on its parchment base.

As ever, rising times depend completely on the temperature in your kitchen, and the alternatives should be obvious if you don’t have a stand mixer.