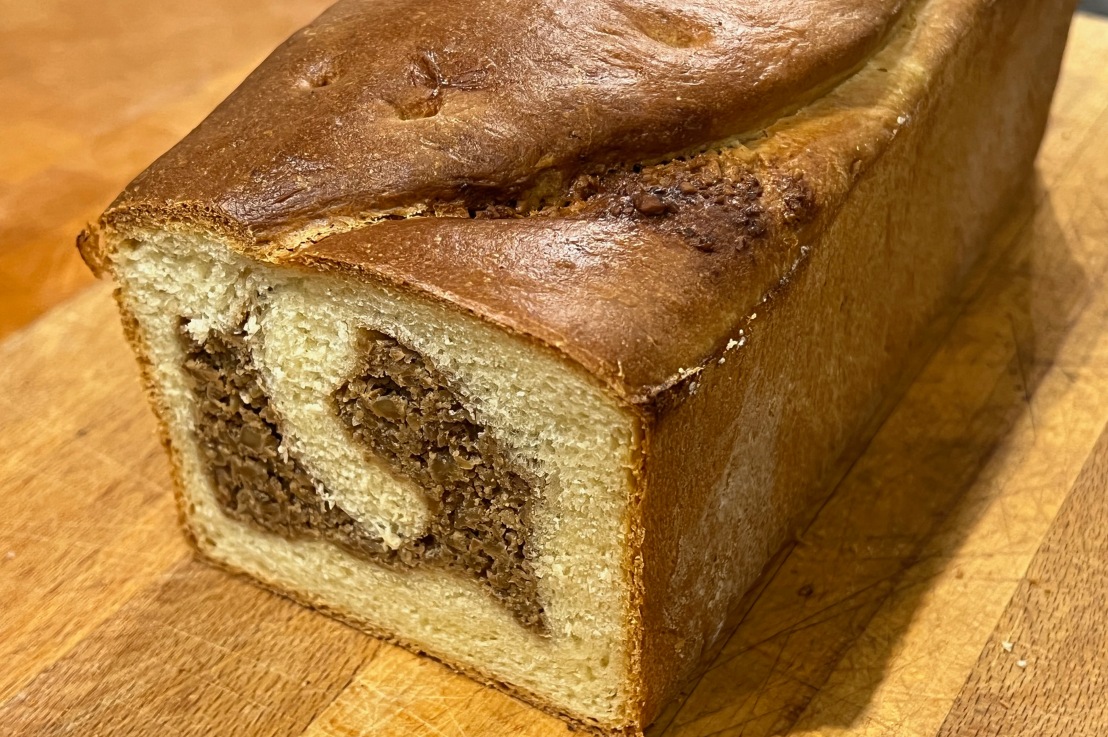 Think of it as the child of a love triangle of brioche, cinnamon bun and baklava, only with a lot less sugar. For Slovenian celebrations – Easter, Christmas, weddings, whatever – the Potica (the “c” is pronounced “ts”) is a favourite baked item. (I’m not really sure whether to call it a bread or a cake). There is even a special mould for it called a Potičnik, which is a relative of the bundt tin more commonly found in the UK or US, but with a different pattern around the top. However, if you don’t own a bundt tin, you can make a perfectly good Potica in a normal loaf tin, as I’ve done here: it just won’t be quite as striking.

The critical part here is to make a beautifully stretchy dough enriched with eggs, butter and some sugar, although really a lot less than you might expect from similar breads around the world. I’ve started with this recipe from Jernej Kitchen and I’m really impressed: it’s resulted in a truly lovely dough: smooth, elastic, non-greasy and deeply satisfying to work with.

Next, it’s the filling. Staying with Jernej, I’ve gone for walnuts and honey, which is probably the most popular version of Potica: apparently, you can choose any of the usual things that Eastern Europeans like in pastries: poppyseeds are a favourite of mine.

Finally, rolling and baking. Let’s be honest here: looking at the photos, it’s obvious that there aren’t nearly enough turns on my spiral of dough and filling. Partly, that’s the fault of the recipe suggesting that I roll it to 40cm long – I think doubling that would have been good – and partly, I wimped out of how thin the dough was. Next time, I’ll roll out the dough to as close as I can get to the full length of my board and then make strenous efforts to roll the whole thing as tightly as I can.

By the way, proving times are pretty flexible. Jernej gives a couple of options, both of which involve long proves in the fridge; I didn’t have time so I just proved at slightly above room temperature and watched carefully until the dough was risen how I wanted it, which I think worked fine.