As one would hope, visiting the Peace Museum in Hiroshima is a deeply moving experience. The horrors of the atomic bomb are told with an icy clarity. The sheer magnitude of a single blast is shown by a scale model of the flattened city and the fireball that caused the damage. Real portions of damaged building attest to the unnatural power of the weapon. Most tellingly of all, the human stories are told by charred fragments of clothing accompanied by the stories of the people who wore them. A child’s much beloved tricycle, buried with the child by his grieving father, tells the tragedy as strongly as the recording of a mother who describes walking every day, for years, down the usual road to work of her daughter, whose body was never found. 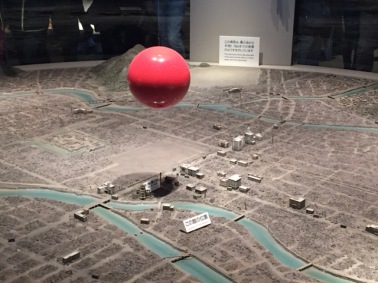 Messages of peace and goodwill from a plethora of world leaders provide a thimbleful of soothing balm, while just down the road, the Children’s Peace Monument tells the story of the girl who hoped that if she could make a thousand origami cranes, she might survive her A-bomb related leukaemia. She did not.

Once I’ve choked back the tears and got rid of the lump in my throat, I’m more disturbed by what’s missing from the Peace Museum than by what’s in it. The problem is this: at the end of my visit, my emotions have been stirred and I’ve dutifully  signed the petition to call upon the world’s leaders to discuss nuclear weapons reductions, but I haven’t actually learned much that matters – merely a bunch of details about an event of whose horrific nature I was already utterly aware.

What I wanted to learn was some insight into how the A bomb dropping came about, from the Japanese point of view: what is their view of the causes of World War II and what made things escalate to the point where the US even considered such desperate measures. And perhaps even from the American point of view: I’d have loved to see the briefing papers given to Truman on the day the decision to drop the bomb was made, or to Roosevelt when authorising the Manhattan Project.

Rather, in this museum, the start of the war was glossed over by a single sentence in a single panel, saying that “tensions arose” after the Manchurian Incident in 1931. Later events – until the bomb itself and its aftermath – get little or no attention.

I can’t help but compare this with Berlin’s Museum of German History, which devotes considerably more space to the question of how Hitler could have risen to power in the first place as it does to, say, the plight of the Germans ethnically cleansed from Pomerania after the war. I came out of the Berlin museum with a clear feeling that the Germans have taken a good, hard look in the mirror and understood the place of Hitler and World War II in their history. I did not get the equivalent impression in Hiroshima.

Saying that “this must never happen again” is, of course, the best possible starting point. But it’s not enough. The burning question is the one of how these wars happen and how the chance of them can be mitigated.

The museum is being renovated, with the new facilities due to open in 2018. Among what is promised is an exhibition floor devoted to the dangers of nuclear weapons, which may well address some of these concerns. I hope it does so. As I gaze at a clear blue sky – just like the one on 6th August 1945 from which such horrors emerged – I can hardly contain my gratitude for having been born into what is now seventy years of peace for my country. Hiroshima should be an ideal site for focusing minds on maintaining peace as best we can.