The Japanese love of their cameras is famous, to the point where the cluster of Japanese tourists snapping away is a hardy old cultural stereotype. My assumption has always been that this is because of the Japanese love of gadgets and the associated fact that they make the world’s best cameras. But having been to Kyoto, I’m not so sure.

Kyoto is like a normal city onto which some gigantic god has sprinkled fistfuls of shrines and temples: you can’t walk for more than a hundred metres or so without running into one. The size varies from modest individual shrine to massive temple complex, but they all share the characteristic of having clean lines and interesting shapes. When taking photos here, you have to pay more attention to composition than anywhere I’ve ever been, because there’s always some interesting piece of framing that is possible. 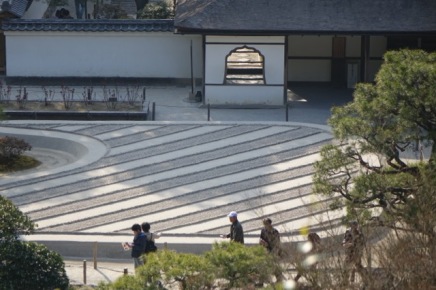 The fact that this isn’t accidental is something you realise when you’ve been through some of the city’s many gardens: whether it’s a zen sand garden (who, I wonder, first thought of simply raking sand or gravel into harmonious patterns), the formal gardens set around water with their pavilions, stepping stones, bridges and ornamental trees, or the enormous park-like gardens that surround the imperial palaces, you feel that every square metre has been laid out by someone who knew exactly what he wanted the space to look like from every angle and was quite clear about the emotional responses he hoped to induce: calm, harmony, a sense of rightness about the world.

It seems to me that the Japanese don’t just love their cameras because they’re into gadgetry. It’s that the idea of the perfect composition of an image is hard baked into their culture. You see it in the prints they revere from Hokusai, Utamaro et al, and in the spectacular Kano school scrolls in Kyoto’s Jukoin temple. And it’s part of everyday life – or at least special occasion life. In Kyoto, a cool thing to do is for groups of young girls to come here for a trip in which they rent kimonos and go and photograph themselves (or get friends to do it) in full traditional regalia near the various temples and beauty spots. The combination of kimono and selfie stick is a common sight. More spectacular still is when you see geishas in full, white-faced splendour (usually, to be precise, the “maiko” or trainee geishas).

For most of the world’s major tourist cities, if you do a modest amount of reading up before your visit, you get a decent idea of what it’s going to be like to be there. It’s not just that you read the list of attractions and formulate a mental tick list: travel writers generally do a good enough job that you get some sort of feel for the nature of the destination. 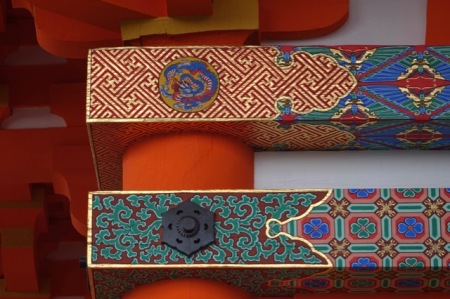 I knew lots of things about Kyoto before coming here: Japan’s pre-Shogunate Imperial capital, still a major working city and a centre for arts and crafts, the highest density of temples and shrines on the planet, many famous gardens, a beautiful setting, etc. But what I read didn’t prepare me for the reality. The inner calm of those miraculous garden spaces, the sense of cultural importance imparted by the exquisite workmanship on every temple, the understated joie de vivre of the girls giggling under the spectacular flowers of their kimonos (we’re just at the beginning of the blossom season, so everything is floral) give a sense of balance and well being of which I had no real expectation. 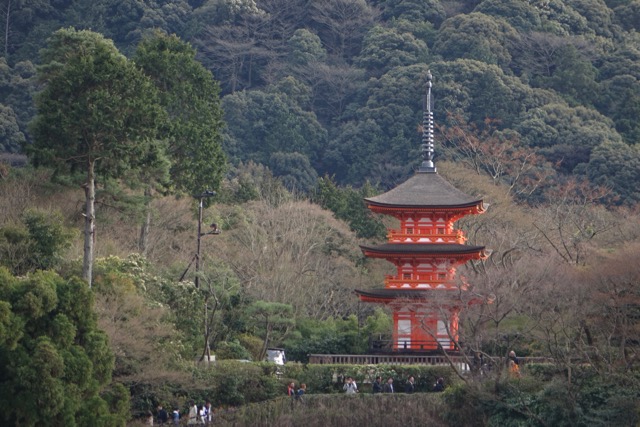 Back in the 8th century, Kyoto was chosen as the location to which the Emperor should move his capital in order to move away from religious influences. The Imperial geomancers loved the protection and natural beauty of a site bounded on three sides by mountains and split by a broad river: snow-melt from the mountains means that there is water all over the city, with countless canals and storm drains meaning that (at least in spring) water is running wherever you go. Today’s density of temples says that the move away from religion wasn’t stable. But I reckon the Imperial geomancers hit the bull’s eye.